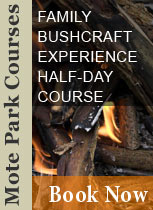 "The Last of the Mountain Men"

"The Last of the Mountain Men" - ‘The true story of a living American legend – Sylvan Hart – who has lived alone for 35 years on Five Mile Bar, beside the River of No Return in the Idaho Rockies’

I accidently discovered “The Last of the Mountain Men”; the amazing tale of Sylvan Hart, written by Harold Peterson around six or seven years ago within a bulk purchase of random second hand books from eBay. I forget which book this bulk job-lot contained that obviously initiated the purchase but I do recall a large cardboard box arriving by post van one afternoon.

Sifting through the box I found a book with a worn and water stained cover with the amazing photograph of a gentleman of some senior years adorned in buckskin garments and wearing a bearskin hat – this  had me intrigued, as did Peterson’s Prologue:-

‘The importance of Hart is his existence as visible, tangible proof that the Jeffersonian, Thoreauesque vision of total independence and self-sufficient freedom continues to be a practical (and even luxurious) alternative’ 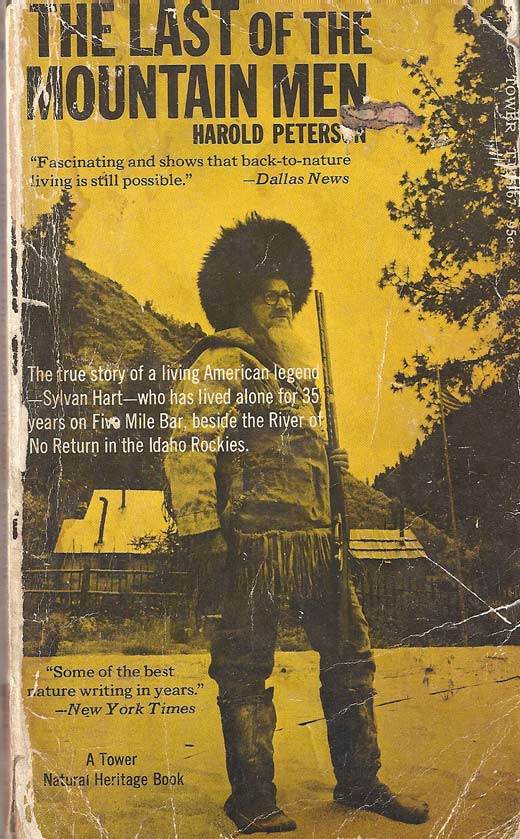 I devoured the book over the course of several evenings often flicking back and forth to the fourteen or so black and white pictures contained in the books centre. Hart, otherwise known as Buckskin or Buckskin Bill, was obviously a very capable and talented man in so many different ways - able to produce his own firearms, knives, tools, clothing and food he was exceptionally self sufficient.

‘A sizeable portion of Buckskin’s winter had been spent carving a complete set of utensils and dishware from cherrywood. Proudly pointing out that six different colors could be seen in the smooth wood, he exhibited samples: a beer mug, plates, forks, spoon ladle, cup, bowl, dish, clamps, mortar and pestle, wine cup, lemon squeezer, and a whimsical pie crust crimper that spells out, “More pie, Louise”, along the rim of the crust. The first pie decorated therewith, he said, had incorporated thirteen yellowheaded blackbirds. That was probably a joke, but a certain reluctance to ask took hold. Too many such jokes turn out to be – also – true.’ Harold Peterson 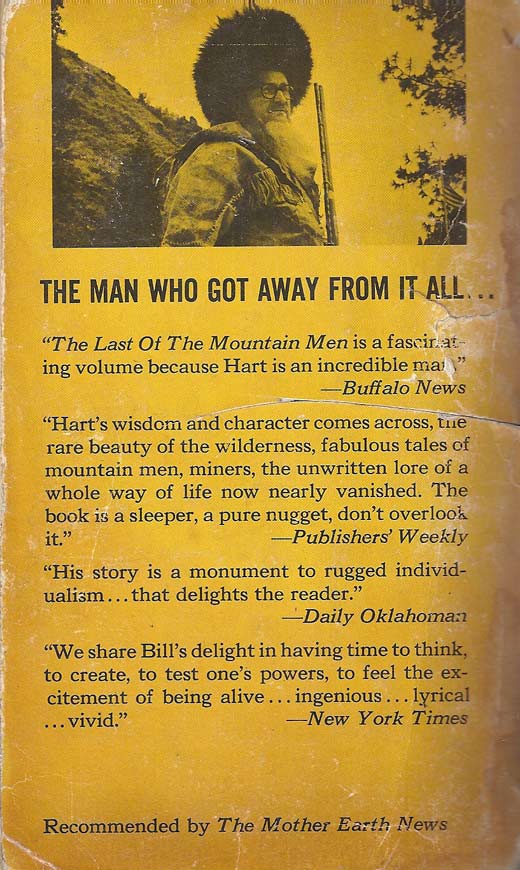 I loaned the book to my father who in turn showed it to a friend of the family, John Partington Smith, who I have known and admired since I was a child. John kindly found out that the book had been republished in the United States and managed to acquire several copies including one as a gift to my father. I was delighted to see this wonderful and inspiring book back in print and it was such a treat to see colour pictures of Buckskin Bill.

I would recommend this book to all and sundry as the tale is as beautiful and meaningful as the pearls of wisdom shared by Hart:-

‘Why limit yourself to something that’ll kill your mind when the world’s a whole storehouse of possibilities?’ Sylvan Hart

#3 Douglas T. Harper 2014-10-22 06:32
My Father gave me this book when I was about 12 years old. (Iam 54 years old now). I still have that same book, and I had the opportunity to see where "Bill" lived, while I was fighting fire some years back.
My father always wanted to be like Bill, and had many of the same talents and attributes.
Both My father and Bill, were amazing men, born in the wrong time, with skills, abilities, and natural knowledge, given to few, and acquired by even fewer.
Great book. Compelling, and heart wrenching in a profoundly odd way.
#2 Phil Brown 2011-07-27 15:54
We received a lovely email on Saturday 16th of July 2011 at 7:42 pm

"Hi Phil, Just like you, I too, "Accidentally came across this book, though I would love to have heard Sylvan's views on "Accidentally i however have equal respect for Harold Peterson,. I think his sensitivity, powers of observation and command of the language was extraordinary. I was wondering if you knew what happened to the gentlemen? A cursory look-up on google brought up a candidate who lives in Big hole, Montana that fits the bill but I am not sure. Any idea or fact would help. Thanks for the superb review. Best of luck, Roshan "

Thanks for the email and I am glad you enjoyed the short review.

I have no idea what happened to Peterson! I wouldl ike to know what you find out so please do stay in contact.

Phil."
#1 Phil Brown 2011-05-04 07:57
We have just received a lovely comment about this review by Phil Brockes on the "Video footage of Sylvan "Buckskin Bill" Hart" article on the Badger Bushcraft Blog http://www.badgerbushcraft.com/musings/video-footage-of-one-of-sylvan-qbuckskin-billq-hart.htm :-

"Hi Phil just finished "The Last of The Mountain Men" Absolutely superb book one of those you cant put down.. found myself reading each page several times just to take it all in ...The atmosphere that is created in the stories is enthralling to say the least... Sylvan's memory at the time as stated in the book is encyclopedic and his skill in fabricating everything that he needs to not only survive but live comfortably is astounding..An excellent book without doubt have now passed book on to my friends and they thinking the same..PhilB" 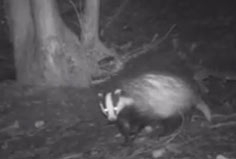